I've been waiting for a game to come out for a few months now and yesterday 30th August it finally came out, what was the game I hear you asking? Why Two Point Hospital of course!!
Now if your an old woman like me, you might have played or heard of Theme Hospital. It was released in 1997! Its 21 years old! Now I am really feeling old! 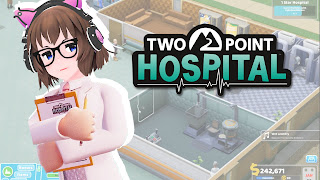 I was thrilled to hear that they were recreating it, and wow have they done an amazing job so far! I'm always worried when devs try to 'remaster' a game, in case they remove some key features of just totally revamp it hoping to make it popular from the previous franchise. But so far, they have kept all the good points and improved so many things! Well done.

I also made a Lets Play for it! And I'm pretty proud of a few things.
1. I recorded the play through, edited the footage and added my 3D Avatar all in one day. I did not think that was possible!
2. My editing for the game was much better, taking notes when I watch my favourite YouTubers :D
3. I planned ahead and recorded 3 episodes, I still need to edit them but I recorded the game play in advance which should make for quicker uploads!

So a pat on the back for me I reckon!

Here's a little trailer I am using to 'promote' my episode, but you can go watch the full episode on my Just Abby Channel ;)

Now I know most of you are not here to read about this channel, I'm well aware your dying for Lovesick Ep5. I'm waiting on one more thing I promise!