Today I finished my video for the Halloween Special

Unfortunately its not a 3D animation like last years Video
BUT
I still love it!

I worked with Innocently Creating on another 2D Animation and the video will be a time lapse of that animation. The end result is perfection! If your a patreon you can see the final animation on my Patreon Page right now, otherwise you'll have to wait till the 30th October! 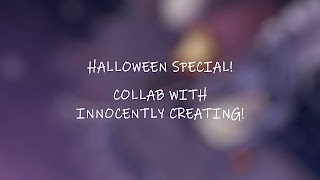 I'm also going to be doing a Halloween special on my Just Abby Channel
I'll be playing Five Nights at Freddy's...

That I do not love.
at October 21, 2018 No comments:
Email ThisBlogThis!Share to TwitterShare to FacebookShare to Pinterest
Labels: 2d, animation, just abby, sakura media

Well you haven't heard from me in awhile! But I've gotten lots done!

I spent a good few days going over my YouTube videos, adding cards and trying to improve descriptions etc. One big thing I did change was the Lovesick Episodes thumbnails!

I'm in love with these! Hopefully they are more click baity ;)

The Lovesick contest also finished! I had over 30 submissions to look over and it really made me happy to think people made these, not just for the contest, but showing their favourite moments, it made the series look so cool, even I got goosebumps! It was a very hard choice coming up with a winner! But I am very happy with this trailer and will be uploading it and a few runner up submissions on my channel in the next few hours.

I also bought a little glass box in real life to use with my patreons, more on that soon!

Unfortunately I haven't had much time to finish off the Miraculous Animation, I am rally going to try and get that done for next week. After that I can setup the audio for the 1st episode of Lovesick Season two!
at October 10, 2018 1 comment:
Email ThisBlogThis!Share to TwitterShare to FacebookShare to Pinterest
Labels: lovesick, sakura media, yandere simulator

I sent out the first script for season two of lovesick today!
I've been stuck for ideas on her elimination for awhile, but I think I've landed on a winner.

One thing I have noticed with this script is, its short. Which is a worry.
There's pros and cons to short episodes

Its hard because most people don't watch a video on YouTube that's longer than 10 mins unless its good ALL the way through. If you have even one short silence in a video people are more likely to click off, especially if there's an Ad Break.
But so many people comment that they want the episodes to be longer.

Imagine how long that would take me, heck Osana might be out on Yansim before I finish this series!
lol

I have lots of other things I want to do after Lovesick, but i have decided to get this done first, so I want to power though and get this series done.